It’s time for another Geek Feminist party! This party is in honour of our new blogger Courtney, who also writes for From Austin to A&M. You might also remember Courtney from Amanda Hess’s interview at The Sexist. She guest-posted here in September.

Courtney, I hope you enjoy this edible circuit, at least to look at! 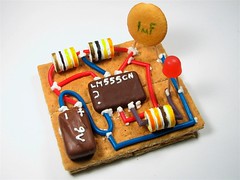 Mary is a Free Software contributor, computational linguistics research student and programmer at large. She can also be found at puzzling.org and Hoyden About Town.