I’ve been working on a rather silly but entertaining project for the past few weeks: 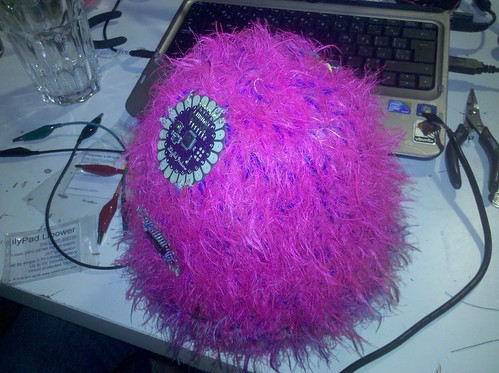 It’s a hat, that’s also a compass.  There are LEDs in the brim – whichever is pointed North is the one that’s on.  I’m planning on adding a “party mode” which just lights them up in various patterns, but haven’t gotten around to it yet.

Did I mention that they are pink LEDs? 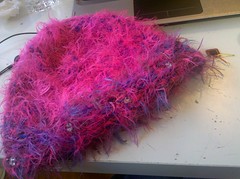 There’s also a secret buzzer underneath the hat so that the wearer can know where North is without asking someone else to tell her which light is on. The various parts: 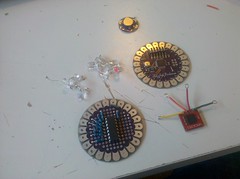 Edit: I’ve pushed the source code to bitbucket; it’s fairly hacky, but will be evolving over the next while :)

Anyone else working on fun knitted things, wearable computing projects, or knitted electronics?

This is also an open thread, for discussion of subjects of general interest, things in older posts, and things we’ve never posted about.

Leigh is a student, hacker, and organizer of communities both online and offline. She blogs, dents and tweets.